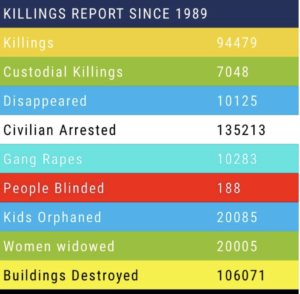 India bombed Pakistan. Now Pakistan will bomb India. It is going on for years. #Kashmir in the meantimes bleeds. We all need peace.
Indian violence in Kashmir since 1989:
Killed by Indian army: 94,479
Custodial killings by Indian army: 7,048
Disappearances of Kashmiris at the hands of Indians: 10,125
Gang rapes by Indians in Kashmir: 10,283
Kashmiri blinded by Indian firing: 188
Kashmiri Kids orphaned: 20,085
Kashmiri Women widowed: 20,005
Kashmiri Buildings destroyed: 106,071
Its about time the world grant Kashmiris what the #UN promised and Indians and Pakistanis agreed to: A right of self-determination. Allow vote to decide if they want to remain in India, join Pakistan or become an independent nation.