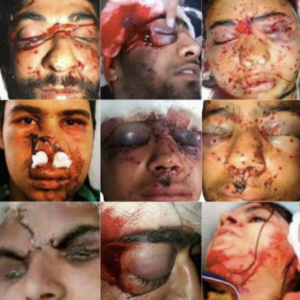 Pellet munitions are trucked by convoys into Kashmir from India where they are dispensed to police & counterinsurgency troops. This collage of pellet victims is from the 2016 uprising when the Indian occupying army went on a rampage. The photos show the scale of facial injuries & disfigurement caused by pellets. Even though they are called non-lethal, they are clearly intended to inflict maximum harm, including to children, by blinding, disfiguring, injury to internal organs, lifelong pain & health problems, demoralization, & death.

Stand with Kashmiris in demanding the end of pellet guns & the immediate, unconditional withdrawal of all Indian troops. End the occupation. Self-determination for Kashmir.

(Photo collage from 2016 by Freedom For Kashmir)