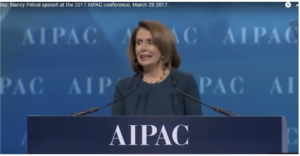 Charges of anti-Semitism are going to dog Ocasio-Cortez, Omar, & Tlaib as long as they’re in the US Congress & speak out for Palestinians & BDS. In the best interests of Palestinians, they cannot afford to be flamboyant or reckless in their formulations. That doesn’t mean they should be conciliatory with Zionists but that they show political wisdom. Genocide is at stake.

Nevertheless, this latest flap accusing Ilhan Omar of anti-Semitism over her tweets against AIPAC is just an attempt to demoralize her. Does anyone recall even a peep of protest out of Chelsea Clinton, Meghan McCain, Nancy Pelosi, or any of the politicians when the Rohingya genocide was at full peak? Did they protest during the carpet bombing sieges of Gaza or against Israeli snipers taking down young kids, journalists, medics at the Great Return March? Have they ever spoken out against the persecution of Muslims in the US or elsewhere? Do they give a rat’s ass about human rights anywhere if there isn’t money in it for them?

(Photo is Pelosi at AIPAC convention)