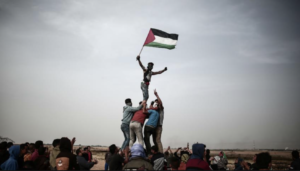 Guilt by association is considered a logical, ad hominem fallacy but that needs to be rethought in the light of Zionism, anti-Semitism, & genocide against Palestinians & in the light of the Burmese genocide against Rohingyas. When Pope Francis made a state visit to Suu Kyi & the generals at the height of the genocidal onslaught against the Rohingya in December 2017 without uttering a peep of protest, is it ad hominem fallacy to accuse him of running interference for the genocidaires & thus guilt by association? Did he try to privately sweet-talk the generals out of genocide? But what would be the point of that for a spiritual leader?

When Alice Walker, Eva Bartlett, Vanessa Beeley promote, speak, & work for David Icke who believes reptilian, extra-terrestrial Jews called Illuminati run the world, is it ad hominem fallacy to suggest their support for Palestinians might be more rooted in hatred for Jews than justice for Palestinians? Or that their support for Assad might be rooted in his anti-Semitic policies? When they politically collaborate with fascists & eulogize the dead ones who are notorious, rabid Islamophobes, is it jumping to conclusions to suggest guilt by association?

When prominent activists like Medea Benjamin, Miko Peled, Abby Martin, Greta Berlin attended the annual 2018 New Horizon conference in Iran of world-renowned, hard-core fascists, holocaust deniers & other anti-Semites, rightwing libertarians, conspiracy nut jobs, Assadists up the ying-yang, & legions of retired CIA & US Pentagon operatives, or when Tamika Mallory of the Women’s March praises Louis Farrakhan despite his rabid anti-Semitism, one could make a case against their guilt by association. None of these people are fascists. They are just colossally reckless in protecting the Palestinian solidarity movement from charges of anti-Semitism at a time when Palestinians are fighting a life & death struggle against genocide.

Genocide changes everything. So do Islamophobia, anti-Semitism, & Zionism. Making a clear distinction between hatred of Jews & opposition to Israeli apartheid is made almost Sisyphean by Zionist propagandists & Assadists. There can be no collaborations or associations of any kind with fascists & anti-Semites not only because they’re detestable but because their commitment is to hating on Jews, not freedom for Palestinians. There can be no compromises on that score.

(Photo from Great Return March in Gaza by Getty)