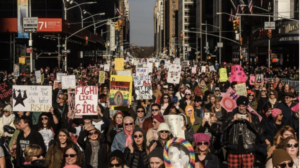 You better believe that the sight of over 7-million women marching on every continent the day after Trump’s inauguration on January 21st, 2017 scared the living daylights out of the elites who run this planet. What scared them even more is that march organizers in the US included a young Black woman named Tamika Mallory, a Latino woman named Carmen Perez, & Palestinian activist Linda Sarsour & that in her speech Angela Davis called for “freedom & justice for Palestine.” Just as it did in the 1960s, the NY Times went into high gear to discredit the movement. Then it used lesbians & spinsters to mock feminism. Feminists of my generation made chopped liver out of that crap by solidifying with lesbians as sisters, entirely part & parcel of our movement. In 2017, Zionism & Black Lives Matter have added a whole new dimension to the NY Times’ hit job against the Women’s March. Erstwhile progressives had a field day demeaning the Women’s March as a “pussy parade.” Blinded by misogyny, they didn’t notice that some of the most reactionary & dangerous forces in world politics were circling like vultures.

It was just a few months after that march that the NY Times set its Pit Bulls into motion. Bari Weiss became an op-ed writer at the NY Times in 2017 but was already well-known as a pro-Israel activist at Columbia who formally charged pro-Palestinian professors like Joseph Massad with anti-Semitic harassment of Zionist students. (The teachers were eventually exonerated.) On August 1st, 2017, she wrote “When Progressives Embrace Hate,” which is a hatchet job particularly on Linda Sarsour for alleged anti-Semitism & on Tamika Mallory for her association with Louis Farrakhan of the Nation of Islam.

Farrakhan is deranged in his anti-Semitism but because the Nation of Islam runs effective social service programs in the Black community, many activists do not take issue or distance from his hate-mongering rants against Jews. That nonchalance toward anti-Semitism is intolerable politically. First, because it’s hate & second, because it drives a wedge between the Black community & Jewish civil rights supporters. Mallory is a young woman with a lot to learn & quite frankly it is not out of line to ask her to resign if she will not repudiate the views of Farrakhan. She’s way over her head politically. In interviews on national TV, she gave a garbled explanation of the cause of Palestinians against Israel & said pro-Trump & anti-abortion rights speakers would be allowed as speakers at the Women’s Marches. But Bari Weiss & other NY Times writers like Farah Stockman are using Mallory’s ignorance to smear the Women’s March leadership as anti-Semitic.

Farah Stockman gave a NY Times interview today titled “A Rift over Power & Privilege in the Women’s March” where she entirely misrepresents the role of Black women in the 1970s women’s movement by excluding their participation & actually blames Black women for the present conflict over tomorrow’s Women’s March saying they’re involved in a power grab with white women, especially Jewish women, over who should lead the women’s movement. This is lower than pond scum stuff.

There are now three political organizations claiming ownership of the Women’s March who are actually holding competing marches on the same day in the same cities. The confusion has led many cities to cancel rallies. There is the Sarsour/Mallory group called Women’s March, Inc.; there is March On, organized by a Zionist activist named Vanessa Wruble who initiated the claims of anti-Semitism; & there is Women’s March Alliance, a group led by corporate figures & more likely an anti-feminist or Zionist front group. No one owns the women’s movement. Sarsour, who is a Democrat, & Mallory with her associations with Al Sharpton & Farrakhan do not represent the majority of women in this country. If they want to salvage what they have built, they will have to restructure their organization to make it democratic. If they don’t restructure, it will be destroyed by this campaign to vilify them.

Today NY Times columnist writer Michelle Goldberg weighed in on the controversy with an article titled “The Heartbreak of the 2019 Women’s March: It’s fracturing over anti-Semitism, but maybe implosion was inevitable” where she tries to sound like the voice of reason compared to rabid Bari Weiss. Movement-building is hard; forging unity is a complex, protracted endeavor in every freedom struggle when there are differences in class, ethnic, & political perspectives. But Goldberg, who has never spent a moment trying to build a movement, damn well knows that the movement is not fracturing or imploding primarily over anti-Semitism but over racism toward Blacks & Palestinians. It is not conspiracy-mongering to claim beyond a shadow of a doubt that Zionists combined with anti-feminists are behind this attack on the Women’s March. It’s a very effective campaign which at once divides Black activists from whites, Jews from everybody, attempts to not just exclude but vilify supporters of Palestinians, & destroys the women’s movement.

How do we deal with this fracture? What should New York & other cities do with two competing marches going on? Whoever leads these marches, for whatever reasons, does not necessarily represent the thousands who will be attending. Activists in large contingents should attend both marches with banners calling for unity in the struggle for women’s rights & engage in unity-mongering up a storm on social media. By no means should support for Palestinians be mitigated or toned down in any way whatsoever. If there ends up being two movements, one under the flag of apartheid Israel & one demanding justice for all women including Palestinians, so be it. Some differences cannot be resolved. Racism & support for genocide would be chief among them.