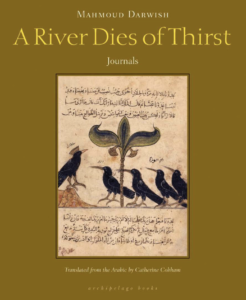 Israeli author Amos Oz (1939-2018) habitually used the literary conceit of metaphors to dodge hard questions & dissemble the character of Zionism & Israeli apartheid. Mahmoud Darwish (1941-2008), the rock star of Palestinian poetry, wrote many poems & reflections on metaphor–one titled “The cunning of the metaphor”–using metaphors as they are poetically & psychologically intended: to deepen understanding & change the way we see things. Exiled with his family in the 1948 Naqba, he became the Palestinian voice of loss & exile & his poetry readings drew thousands..
“A River Dies of Thirst” (titled “The Trace of the Butterfly” in Arabic) was Darwish’s last collection published eight months before his death in 2008 from heart disease. It’s a wondrous collection of poems, prose poems, journal entries, meditations. The collection in English is under copyright & I do not wish to be dragged into court for violating intellectual property rights. I only highly recommend the book as well as collections of other Darwish works like “Almond Blossoms & Beyond”, “If I Were Another”, “Why Did You Leave the Horse Alone?”, “Memory of Forgetfulness”, “Unfortunately, It Was Paradise”, “The Adam of Two Edens”, “The Butterfly’s Burden”. He published over twenty volumes of poetry & ten volumes of prose, some translated into 35 languages. Translating poetry is always a problematic matter but even in translation Darwish’s poetry is magnificent & powerful.

This is his poetic farewell to Edward Said who died in 2003: https://www.youtube.com/watch?v=cmPCZhk3y1E

This poem is available on the internet, apparently not under copyright:
I Come From There
I come from there and I have memories
Born as mortals are, I have a mother
And a house with many windows,
I have brothers, friends,
And a prison cell with a cold window.
Mine is the wave, snatched by sea-gulls,
I have my own view,
And an extra blade of grass.
Mine is the moon at the far edge of the words,
And the bounty of birds,
And the immortal olive tree.
I walked this land before the swords
Turned its living body into a laden table.
I come from there. I render the sky unto her mother
When the sky weeps for her mother.
And I weep to make myself known
To a returning cloud.
I learnt all the words worthy of the court of blood
So that I could break the rule.
I learnt all the words and broke them up
To make a single word: Homeland…..