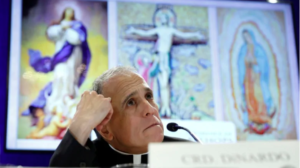 The Catholic Church is in an international maelstrom over accusations of priest sexual abuse. In the US, the top cardinal was forced to resign over allegations of decades of assaults on minors & seminarians. Now the US Conference of Catholic Bishops meeting in Baltimore last Monday were ordered by Pope Francis & the Vatican to delay taking action to address the crisis in the US.

Pope Francis is shamefully compromised with the Rohingya genocide, collusive with Israel against Palestinians (a Hail Mary at the apartheid wall does not constitute solidarity against genocide), & hasn’t done anything substantial to expose & hand over priests accused of sexual assault for prosecution. Outside of washing one refugee’s feet in a grandstanding media spectacle, he hasn’t done one thing to merit the respect of Catholic laity or anyone else. Consider the good he could do if he weren’t so wedded to state power. Catholics deserve better than him.

Photo is a perplexed Cardinal Daniel DiNardo, president of the US Conference of Catholic Bishops, telling reporters that Pope Francis wants them to postpone action to address priests raping children. Maybe the pope & his minions in the Vatican ought to be prosecuted on several counts, including conspiring to protect rapists.