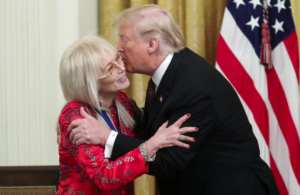 One of Trump’s first recipients of the Presidential Medal of Freedom award yesterday was 73-year-old Miriam Adelson, the wife of 84-year-old Sheldon Adelson, the billionaire casino mogul & arch-Zionist who with Haim Saban plays a leading role in promoting Israel & Zionism in the US. Miriam, who married Sheldon in 1991, is not just a trophy wife but an Israeli-trained doctor specializing in chemical addiction–& an arch-Zionist in her own right. She has used the casino wealth to build addiction treatment facilities in Las Vegas & in Israel.

Miriam was born in Palestine before the formation of Israel & Sheldon was born in Boston. They met when she came to the US for training in addiction medicine at Rockefeller University, NYC. What cemented their relationship was mutual rabid Zionism & realization that they could use gambling profits to impact US politics regarding Israel. Though their politics are considered even more right wing than AIPAC, they are among its largest donors. They also bankroll Republican congressional tours to Israel & countless Zionist organizations & initiatives in the US. The Adelsons, along with Haim Saban, are primary sponsors of Friends of the Israeli Defense Forces, a Zionist group that just raised over $60 million in Hollywood for the Israeli army carrying out genocide against Palestinians. Both, under their individual names, contribute millions to Republican candidates & super PACs. In the 2012 election, she was the largest female donor to Republicans, contributing more than twice as much as those of the next top 15 women donors combined. In that election, Politico reported a total of $46 million from her & $50 million from him. Since his worth of over $33 billion makes him one of the richest men in the US & in the world, they can afford to buy a lot of candidates & influence a lot of elections–including, or especially, Trump. Sheldon Adelson gave $25 million to a Trump super Pac & $5 million for the inauguration. There is no report if Miriam gave individually to either.

As rabid Zionists, the Adelsons care about only one issue & that is Israel. Whatever else Republican candidates who they bankroll stand for is of no concern to them. Sheldon has called Palestinians “an invented people” whose sole purpose is to destroy Israel & opposes any peace negotiations that would get in the way of a one-state annexation of all of Palestine. As the publishers of Israel Hayom, a pro-Netanyahu newspaper in Israel, they are supporters of apartheid & genocide & of course endorsed Trump for US president.

Miriam, with her troll-like husband beaming proudly in the audience, was given this worthless honorific because money can buy US politicians. But it must be emphasized that US policy toward Israel is not determined but only facilitated by these billionaire Zionists. The primary factor in US policy toward Israel is as a stronghold for US economic & political policies in the entire Middle East.

(Photo of Adelson receiving Medal of Freedom by Jonathan Ernst/Reuters)