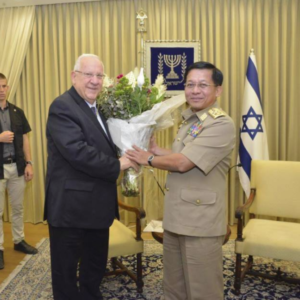 This post about the Israeli president meeting with Burmese General Min Aung Hlaing at the height of the genocidal onslaught against the Rohingya last September is worth reposting to show where Israel fits into the genocidal-industrial complex.

This is Israeli president Reuven Rivlin accepting a bouquet from Burmese Genocidaire-in-Chief General Min Aung Hlaing in appreciation for Israel selling arms to Burma to conduct genocide against the Rohingya people. This was at a meeting in Jerusalem on September 10th, 2017.

Haaretz put its criticism so cogently after pointing out that in the 1990s Israel also sold weapons to the genocidal governments of Rwanda & Serbia: “To send weapons to a government that’s guilty of genocide is very similar to (excuse the comparison) sending weapons to Nazi Germany during the Holocaust. Our leaders nevertheless did this knowingly & desecrated the memory of the Holocaust in the process. It’s important to stress that they turned both you & me into criminals, into accessories to a crime & to abettors of genocide.”

Regrettably, Haaretz did not point out that Israel was founded & survives on the ethnic cleansing of the indigenous Palestinian people.

Honoring BDS, the economic & cultural boycott of Israel, is a powerful way to stand in solidarity with Palestinians against ethnic cleansing & with the Rohingya people against genocide. Buy nothing with a barcode beginning 729 & check every label. The fate of the oppressed in inextricably linked.