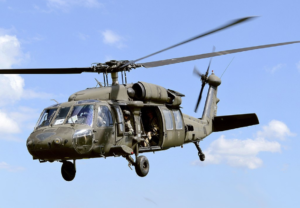 A reliable source informs me that he watched Black Hawk combat helicopters landing here in Border Patrol facilities on the Texas-Mexico border. In a vicious irony, these special operation aircraft were named after Black Hawk, a Native American warrior fighting the incursion of European settlers in the early 19th century.

Are these what Trump intends to use against any adolescent stone pelters among those in the caravan who reach the US border?