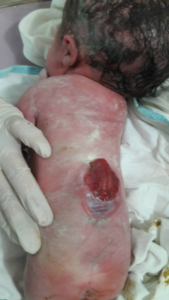 Anti-Assad conservatives are still calling for a US humanitarian intervention in Syria. What have they missed about the US role in defeating all of the Arab Spring uprisings–through massive repression in Egypt & Bahrain to carpet bombing in Yemen & Syria? It’s cognitive dissonance on a tsunamic scale which requires them to shut out reality, especially in Iraq, Yemen, Afghanistan, & in Syria. They talk about Iraq after the siege of Mosul & when it is still under US occupation as if it were past tense & play stupid when it comes to Afghanistan & Yemen or the US role in Israeli bombing of Gaza. What about carpet bombing in Yemen, the Mother of all Bombs in Afghanistan, the tens of thousands of bombing sorties in Syria which left Assadist forces & ISIS intact but used white phosphorous on civilians in Raqqa? What about the US use of depleted uranium, white phosphorous, & other chemical agents?

Meanwhile in Iraq, as a result of chemical warfare, thousands of infants continue to suffer disabling birth defects, including spina bifida, hydrocephaly, stillbirth, skeletal dysplasia, ascitis, cleft lip & palate, club feet. Yemen, under US & UK-backed Saudi bombing, is suffering mass malnutrition, especially among children, & one of the greatest humanitarian crises of our times. Have they any idea at all of what the US is doing to the people of Afghanistan which entail human rights & war crimes on an industrial scale? Do they, like their Assadist nemeses, actually hope Trump–who is deploying thousands of troops against unarmed refugees–will magically morph into a freedom fighter in Syria? What planet are they flying in from?

Whilst the antiwar movement has been unable to build mass actions or any kind of movement because of its support for Syrian & Russian bombing of civilians, these anti-Assad libertarians have been unable to build a pro-war movement because most of the human race, especially in the Middle East, fully understands the character of US militarism & wants absolutely no part of it. Their support for the Syrian revolution is an anomaly in their politics which are fundamentally rightwing & which is why they never tire of berating the non-existent “western left” for its failings on Syria. War mongering either for Syria & Russia or the US-coalition is a hallmark of rightwing politics no matter how you try to spin it. One may be fascist; the other may be libertarian. But they both end up leaving the Syrian Arab Spring uprising to fend for itself against nearly 100 armies & thousands of paramilitary groups.