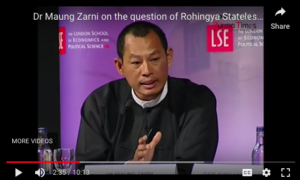 This is Maung Zarni on the issue of Rohingya statelessness. It’s just a brief but very cogent comment on the issue. This was a panel in London in June 2012 during the height of a military onslaught against the Rohingya in Burma when Suu Kyi went to pick up her 1991 Nobel Peace Prize & a truckload of other humanitarian awards, including in the US. She’s sitting right next to him & regrettably we don’t get to hear any response she made. But even then, in other interviews, she was exposing her views toward the Rohingya people as less than humanitarian.

Not to put pressure, but we hope Maung & Ro Nay San Lwin will consider posting their speeches more frequently because they’re so educational & valuable.