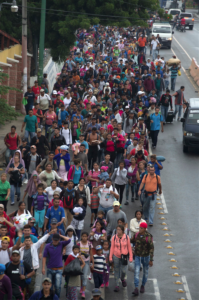 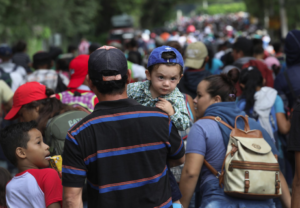 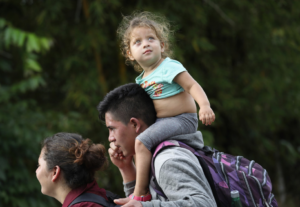 Trump’s racism & white supremacism are so deep-seated & demented that the defiance of the Honduran caravan, now numbering over 3,000 refugees, is making him pop his cork. For a guy who’s unhinged to begin with, that could be life-threatening. This morning, the first thing on his mind–out of all the pressing problems in world politics–was that caravan which he denounced with a mile long of tweets & threats. How dare brown-skinned working people & little kids defy his bullying!? Pushing people around works on his minions so why not Hondurans?

Since he’s so full of venom but entirely bereft of coherence, most of his tweets aren’t worth quoting except his comment that “criminals & unknown Middle Easterners are mixed in” among the marchers. That doesn’t mean very much since to him every brown-skinned person looks like every other brown-skinned person & they all look like “Middle Easterners” which to him means terrorists.

For human rights supporters around the world, the Honduran caravan is an inspiring & righteous expression of defiance against the barbarism of neoliberal immigration & refugee policies. The marchers show us the best of humanity, the determination of the oppressed not to be bullied or coerced by racists & we wish them godspeed on their journey.