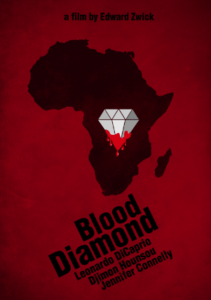 White people should not be allowed under penalty of death to make movies about Africans or other Black people. That massively patronizing white savior thing they have going on makes all white people look like supremacists & damn fools. I just watched “Blood Diamonds,” a 2006 German-American movie starring Leonardo DiCaprio & cringed through the whole rotten thing which at times approached parody. Set during the Sierra Leone Civil War in 1991–2002, it presents itself as a film against conflict diamonds but it portrays Africans either as psycho thrill killers or as pathetic, emotion-driven halfwits who need white people for remedial training in civilization. Not unlike how Black Americans are portrayed in film except with child soldiers rather than prostitutes.

The history of Blacks in the US stunk of such putrid stuff until the civil rights movement of the 1960s when Black studies departments & Black scholars began to correct the historic record. It won’t be soon that Blacks can play a leading role in producing films. But until that time it is deeply regrettable that Black actors have to participate in creating this cinematic swill rather than dramatic presentations of the richness of their lives.

(Photo is poster of wretched film)