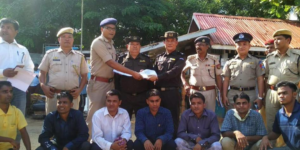 Nothing has highlighted the absolute criminality of modern governments more than the refugee crises around the world. In the US, hundreds of children are kidnapped & incarcerated; European governments turn away war & economic refugees even in the dead of winter or let them drown by the thousands in the sea; Bangladesh is making plans to deport Rohingya refugees to an uninhabitable island in the middle of nowhere; Indian courts are establishing the ‘legalities’ of an all-out assault on the 40,000 Rohingya refugees who fled there since the 2012 genocidal onslaught in Burma. India’s substantial business investments in Burma, its occupation of Kashmir, Hindutva nationalist government with political affinities to Burma’s genocidaires, campaigns against undocumented immigrants, & persecution of Muslims dovetail its treatment of Rohingya refugees. It was only a matter of time before the Modi regime made its moves against the Rohingya living in India.

This is a photo from October 4th of Indian officials handing over seven Rohingya men (those kneeling in the front) to Burmese authorities for forcible deportation to Arakan/Rakhine state. All of the men had fled to India in the 2012 military onslaught when the Rohingya genocide first came to world attention. In India, rather than given asylum from genocide, they were arrested & sentenced to three months in jail but remained incarcerated for six years on charges of illegal entry. According to the UN, at least 200 more Rohingya refugees remain incarcerated for illegal entry. What’s monstrous about this handoff by the Indian government is that the Burmese genocidaires claim the Rohingya are illegal immigrants in Burma so they are stateless & denied citizenship in Burma & thus, under false pretenses, unable to seek asylum in India.

These seven young men are in grave danger since there is no way to monitor or guarantee their safety. Other Rohingya refugees who returned to Arakan state reported being subject to torture. We have every reason to be deeply concerned about their safety. They must be absolutely terrified about what will happen to them. Rohingya refugees in Bangladesh as well as those in India refuse to return home until there are ironclad provisions in place protecting them from the Burmese military & government. Nevertheless, the Indian government has now ordered states to collect biometric data on Rohingya refugees, all of whom they consider illegal immigrants, which they will use to forcibly deport them back to Burma where the Suu Kyi regime & military will be able to finish off their genocide. There are reports that Rohingya activists in India are refusing to cooperate or provide the biometric data for refugees.

Rohingya refugees do not stand alone in India. They can unite with activists from Kashmir, the oppressed castes, other persecuted Muslims, other refugees to demand rights of asylum. Their struggles against forcible deportation from India can be publicized on social media so that international pressure is brought to bear on the Modi regime. How we respond to the plight of refugees from war, occupation, plunder, genocide will mark this generation & this political era & establish whether we march forward to a more humane & just society or get dragged down into the gutter of neoliberal barbarism. That’s not an overstatement. The Rohingya struggle against genocide is central to the struggle for a better world.

(Photo of Rohingya refugees being deported from Reuters)