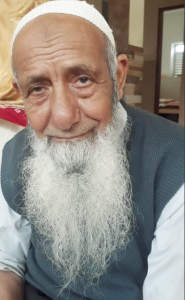 This is 72-year-old Ibrahim Al-Arouqi who Israeli snipers assassinated while he was protesting unarmed at the apartheid barrier fence between Gaza & Israel. He was two years old when Israeli terrorist death squads took over Palestine & declared it a Jewish state. May he Rest In Peace.

(Some are reporting that this man’s name is Ibrahim Nawwaf & that he is 78 years old.)