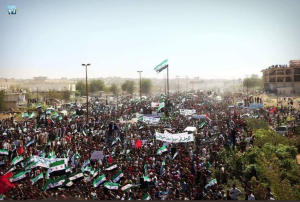 Idlib, Syria: tens of thousands of Syrian civilians, protesters as far as the eye can see, are marching today against Syrian, Russian, & Iranian ground & aerial bombardment. Meanwhile, the antiwar movement is absolutely silent because it is corrupted by support for Assad & Putin & anti-Assadists are calling for US intervention despite US destruction in Syria, Afghanistan, Yemen, Iraq, Libya, Somalia. Such is the state of antiwar organization that those being bombed stand alone & have to come into the streets to demand ‘stop the bombing,’ & ‘stop the genocide.’

History will record the defeat of the Syrian Arab Spring uprising as one of the most monstrous crimes of our times when erstwhile socialists & antiwar activists marched lockstep with fascists, Islamophobes, & anti-Semites to defeat one of the most important antiwar struggles for democracy & human freedom. What has been destroyed must be rebuilt, both in Syria & the rest of the world. Fascism & dictatorship cannot be allowed to advance under the banner of Islamophobia. Any postmortems of the Syrian Arab Spring uprising must begin with condemnations of the corrupted antiwar movement which supports Syrian & Russian bombing of civilians. The shame is immeasurable.