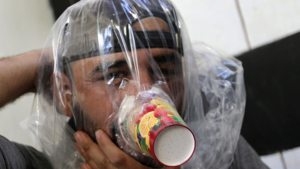 Russian meddling in US elections is penny-ante stuff compared to what the Kremlin is doing in Syria. Syria & Russia are planning chemical weapons attacks in Idlib, the final battle of the counterrevolution against the Syrian Arab Spring uprising. But to cover their ass propagandistically, the Russian military claims it has “irrefutable” evidence that ‘terrorist groups’ & the White Helmets are colluding with several Middle East & US news channels to produce footage of a “a false flag chemical weapon attack” on civilians in Idlib. They’ve got Bartlett & Beeley as well as other Assadist guppies peddling this rubbish on their social media walls. That way, when Syria & Russia add chemical weapons to their arsenal of barrel bombs, cluster bombs, & other savageries against unarmed civilians, Assad supporters, including in the corrupted antiwar movement, can claim it is just fake news.

Our fullest solidarity with the people of Idlib & our profound regrets at the inability, because of corrupted politics, to build an international antiwar movement to defend the Syrian Arab Spring uprising.

Photo is a civilian in Idlib preparing for a Syrian gas attack with an improvised gas mask.