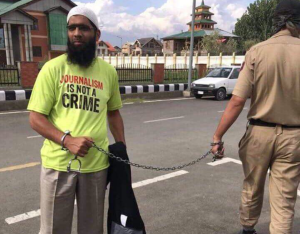 Kashmiri journalist Aasif Sultan was arrested by police in a night raid on his home last Monday, September 1st. His laptop, mobile phone & other documents were confiscated. He has been sent to central jail in Srinagar on judicial remand until September 22nd. Judicial remand allows Sultan to be held in custody longer than is legal under police remand so they have time to figure out something criminal to charge him with.

So far, police haven’t been able to cook up any actual crimes but he was arrested on charges of “complicity” in “harboring known terrorists”, for writing against Indian occupying forces, & for glorifying militancy by writing about Burhan Wani, the man whose funeral in July 2016 was attended by an estimated 600,000 Kashmiris but whose name & photo cannot be shown on FB without censorship & suspension. While being shifted to jail, Sultan was beaten by police for wearing this t-shirt which was then confiscated by police. As evidence for a crime?

Kashmiri journalists have protested for his immediate release & the Committee to Protect Journalists (CPJ) has taken up his defense. The CPJ Asia program coordinator said “Police should immediately release Aasif Sultan from jail & halt efforts to pressure him to reveal sources or become an informer. By reporting on militant activity, Sultan is performing an important public service, not committing a crime.”