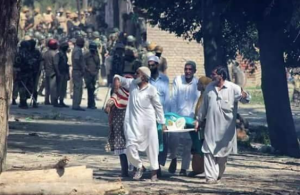 On September 10th, 2016, a Kashmiri man named Yawar Dar was sitting on the bank of a canal when Indian occupying forces showered him with pellet munitions. It was during the uprising that began in July 2016 with the assassination of Burhan Wani by Indian soldiers. Because funeral processions become political protests against occupation, Indian officials allowed only six adults to attend his funeral services–perhaps because an estimated 600,000 attended the funeral of Burhan. Indian occupying soldiers then showered the funeral procession of Yawar with pellet munitions & shells.

On this anniversary of his death, we remember Yawar, as we remember all innocent victims of occupation, with condolences to his family & friends. May he Rest In Peace.