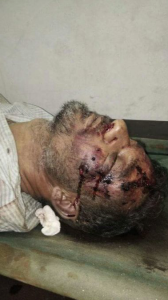 Kashmiris in the Kishtwar District are angrily protesting the custodial killing of this man, 40-year-old Javed Ahmed Malik, & demanding the police officials responsible be charged with murder. Police authorities claim he was arrested for cattle smuggling & while they were transporting him to a health center for routine medical care, he escaped from police custody, fell, & sustained these massive injuries to his head which resulted in his death. Did he fall off a 200 foot cliff? In an age of sophisticated forensics investigations, there should be no dispute about how this man was injured. The song & dance provided by police authorities does not explain the scale of injuries to his head. But he is in custody under military occupation where impunity is the rule of law.

We stand in full solidarity with the protesters in Kishtwar in demanding justice for Javed Malik & his family. May he Rest In Peace.