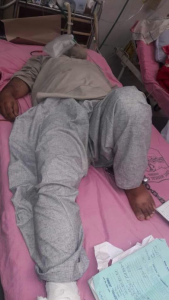 Yesterday Ather Zia posted a tribute to 70-year-old Gulam Hasan Malik, better known as Noor Khan, a well-known Kashmiri freedom fighter since his youth. He was arrested in January of this year & died Tuesday in a prison hospital. This is a photo of him chained to the bed as he lay dying. As Ather points out in this post, the indignity adheres entirely to Indian occupying forces & not to this man whose life was a testament to the dignity of resistance against oppression, occupation, colonialism. May he Rest In Peace as we honor his life.