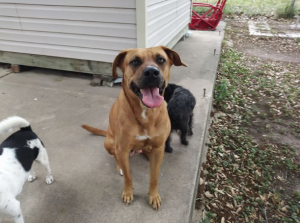 All of my rescue dogs are under 20 pounds (9 kilograms) except Bianca who weighs about 70 pounds. I took her several months back when I accepted a puppy who was grieving & crying because she’d not been properly weaned. So I scouted out the mother & got her brother & another puppy too who were all abandoned. The puppies were content, got weaned, & were adopted into loving homes through a shelter here. Gustavo the brother had to go to a shelter because he jumped the fence & prowled the neighborhood. The neighbors were up-in-arms after he chased the ice cream lady. And quite frankly, I didn’t completely trust his good will toward me despite all the treats I lavished on him.

Bianca on the other hand is a sweet, sensitive girl who loves to play & rough-house with the little ones & exhibits no aggression at all toward my birds. While abandoned, she suffered a broken leg which hasn’t healed right but she manages well enough & uses it to swat those who get out of line. She wakes me up every morning with it so I can give her a morning hug & kiss & when she comes back inside from playing lines up for hugs every single time. This morning when they came back in, she didn’t come so I assumed she wasn’t ready & went off to make breakfast for the rest. After about an hour, I realized she was still outside & went to retrieve her. She was outside the door with her head hung down looking all bereft like she was being punished. I had to go outside in my pjs and hug her up before she understood I wasn’t mad at her.

She’s getting treated for heart worms but when she’s healed, hopefully in August, the shelter will try to find her a more suitable home. But every dog you rescue becomes a part of your heart & it’s very hard to say goodbye even when you know they’re going to a better place.