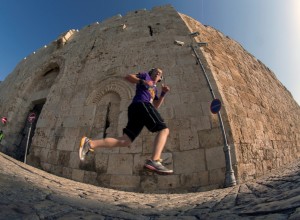 The caption to this photo identifies the runner as one of 25,000 entrants from 60 countries in the fifth Jerusalem Marathon, here leaving the Zion Gate (of the Al-Aqsa Mosque compound) “after running through the Old City.” This marathon is not an athletic event; it’s a colonial affront & assault on East Jerusalem which has been under illegal Israeli occupation & colonization since 1967.

East Jerusalem is a constant scene of Israeli military violence against Palestinians who resist being driven out or having Al-Aqsa destroyed. Running that damn marathon past the Al-Aqsa Mosque compound, which is closed to Palestinian males under 50 years-old, is what Israel calls “Judaization,” a policy more appropriately called Israeli apartheid. The intent is to take over urban space in East Jerusalem, isolate & drive out Palestinians, & invent ancient Jewish traditions to justify ethnic cleansing. The marathon was probably a clarion call to Zionists around the world, including nutcase Christian Evangelists.

Not to be daunted by the odds against Palestinians since they have never ceased defiance, we continue to build the economic & cultural boycott of Israel (barcode beginning 729) & demand “no aid of any kind to Israel.” 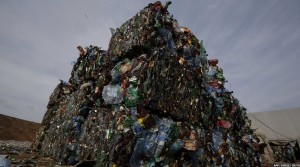 The caption to this photo identified this eyesore as pressed plastic waste at a dump site near Minsk, Belarus & described it as “one of the most environmentally friendly in the country.” Oh my! That’s alarming. What does the rest of the country look like?

Neoliberal waste management has become a catastrophic problem. In the privileged, plundering countries municipalities have hit or miss recycling programs only to learn tons of it still end up in the oceans; is sold to China for recycling where it sits & contaminates their environment; is dumped in the plundered countries causing massive health problems for scavengers earning their livelihood from recyclables. What’s wrong with that picture? Other than the racism, short-sighted stupidity, & utter inability to resolve the problem of waste?

Minsk is nearly 1,000 years old & has a rich economic & political history just in the 20th century during the Russian Revolution (it was part of the USSR) & both World Wars. It’s long been the industrial center of Belarus but since the collapse of the Soviet Union & under neoliberal privatization, industry was expanded without updating technologies & equipment or addressing environmental infrastructure.

An environmental official in Belarus claimed that in the Soviet era waste was exported to parts of the USSR (now that’s a solution whose time has not come) but now piles up outside factories & gets “sent piecemeal to conventional dumpsites if they are not too toxic.” The same official claimed in 2000 that a toxic waste processing facility was being built “but it is hard to say when it is going to be completed.” Under neoliberal waste management policies, odds are the plant is still under construction. 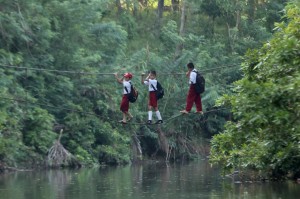 This photo hardly needs a word of commentary. These school children in Bone, South Sulawesi, Indonesia are crossing a river on a rope (in flip-flops, no less) to get to school after a suspension bridge collapsed due to rains.

The majority of Bone residents are farmers & fishermen & this would certainly speak to their respect for education & trust in their kid’s athletic skills. Maybe they ought to prune back on that respect a little so the rest of the world viewing this doesn’t go into cardiac arrest. 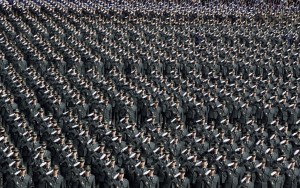 Don’t you just love that wild & crazy thing capitalism’s got going? That creativity that just bursts at the seams & makes this world so diverse & original? Me neither.