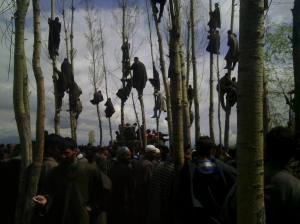 Do you remember this extraordinary photo? It was taken on April 7, 2016 by Kashmiri Javaid Naikoo at the funeral prayers for militant Waseem Malla. The men in the trees are watching the funeral protest/cortege of 70,000 mourners pass by.

The photo has since been the cover of the book “Scattered Souls” by Shahnaz Bashir & in articles by journalist Alana Hunt. It’s really award-worthy photojournalism.