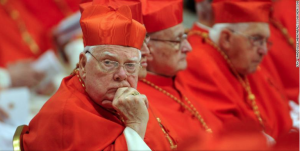 Pope Francis will deliver the final requiems today over the stinking corpse of disgraced Cardinal Bernard Francis Law. Law, a rightwing, “family values” kind of dirtball, was exposed nearly 20 years ago for decades of protecting dozens of priests accused of pedophilia in the Boston diocese he ruled with aristocratic arrogance. Collectively, those priests were responsible for sexual assault on hundreds of children. Law was forced to resign in disgrace in 2002 & moved to Rome where successive popes, including Francis, have protected him with prestigious clerical posts. He lived comfortably until his death in Vatican City rather than in a US federal penitentiary as he deserved.

The suffering he caused hundreds of children & the pain they endure as adults is incalculable. Yet Pope Francis will lay him to rest with all the feudal pomp usually accorded “princes” of the Catholic Church. After his disgraceful performance in Burma covering for the Rohingya genocide, nothing despicable Pope Francis does or says comes as a surprise.

Let us give our own eulogies for Cardinal Law: may he rot in hell.