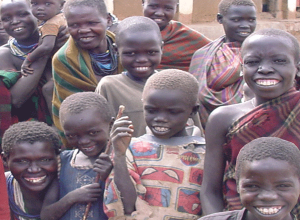 Media is interviewing some of the shattered Houston evacuees who have lost everything & will likely have to relocate to barrack housing in other cities & live in such conditions for quite a while. Millions of people around the world have sustained such natural catastrophes which so violently change their lives forever.

It reminds me of an educational experience I had in the 1980s when a boyfriend offered me “The Mountain People” a 1972 book by Colin Turnbull, a British anthropologist. It became a renowned book & is still considered authoritative about the Ik, an African tribe of about 10,000 people who live in the mountains of Uganda on the border with Kenya. He described them in the most racist terms, almost as sub-humans who had no social structure & were completely bereft of social & personal relations. Parents ignored their children, abused their parents, hoarded food, let others starve in front of them, had no love or familial relations at all. Turnbull “inspired” other writers to pump out moralistic, racist accounts making an anthropological spectacle of the Ik. There were several scathing reviews of Turnbull’s book by reputable scholars but racism has a strong appeal to many & it still carries influence today.

Turnbull had a cement head filled with racism & had no right to be doing anthropology–even though the origins of the field are in racism. A better career choice for him would have been hauling manure in a horse barn where he could do no harm. What he did not grasp is that the Ik had been a hunting & gathering society but in the 1960s the government confiscated their ancestral lands & turned them into a wildlife preserve. The Ik way of life was outlawed & they were reduced to poachers on government lands. Like the people of Houston, they lost everything & were shattered. When Turnbull was doing his numb-skulled study, the Ik were still trying to get their bearings & recover as a society.

Turnbull became a follower of the Dalai Lama & died in 1994. The damage he has done outlives him. I dumped the boyfriend for finding such a book credible.