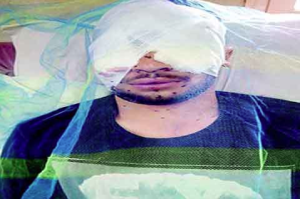 This story from Greater Kashmir has to be read in full to be believed: a 16-year-old boy named Sahil Hamid will never be able to see again after Indian soldiers shot him in both eyes with pellets. He was not protesting one of their hunt to kill operations but was standing on the road as they returned from one. Twelve others were admitted to hospital for pellet injuries, including nine also shot in the eyes.