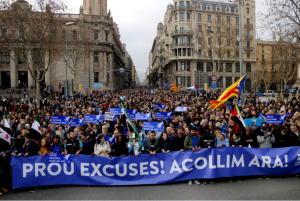 This is the lead banner of over 160,000 protesters who marched in Barcelona, Catalonia yesterday demanding the Spanish government take in more refugees in response to the humanitarian crisis in the Mediterranean with thousands of refugees drowning.

The banner reads “Enough excuses! Welcome them now!” Other banners said “Refugees welcome.” A Catalan movement named “Our Home, Your Home” representing 300 associations, NGOs, cultural groups, & citizens sponsored the march. They marched from the Barcelona city center to the Mediterranean coast as a symbolic act of protest against the thousands of refugees allowed to drown.

Ada Colau, the mayor of Barcelona who was among the protesters, said the protest was sending a clear message to the European Union that “the current EU policies don’t represent us; we want to welcome refugees”. She said Barcelona will a “city capital of hope, humanity & ethics” to counter the racist & xenophobic response elsewhere in Europe.

Spain has only accepted 516 of the 10,500 refugees proposed for the country by the European Union, to be completed in two years. Barcelona has initiated its own hosting program to accept thousands of refugees.