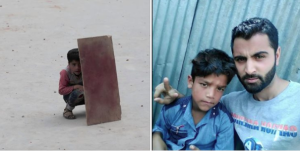 The first photo from May is a young boy outside the Jamia Masjid mosque in Srinagar when Indian paramilitary soldiers & police confronted & provoked youth. He was taking cover behind cardboard from military violence against worshippers. It shows the reckless disregard troops have for the safety of children & for freedom of religion. They’re creating conflict around the mosque in the same way Israel does around the Al-Aqsa mosque in occupied East Jerusalem.

The second photo is Zahid Shah (who introduced parkour to Kashmir) with the same boy.

Posted in honor of the children of Kashmir.