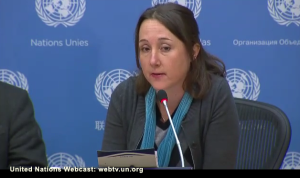 Eva Bartlett is being toured in the US by pro-Assad forces who claim to be antiwar but support Syrian & Russian bombing of civilians as a freedom operation against “throat-cutting, organ-eating jihadist terrorists.”

Her speech at the UN Syrian mission was a predictable litany of accusations about those “jihadists” which will go over well with committed Assad supporters. But critical-minded activists & those confused about the Syrian war will require elaboration–which unfortunately Bartlett may not be able or willing to give.

Bartlett’s mantra is that there never was a popular uprising against Assad’s dictatorship in 2011, that since its beginning, the war has been a proxy war against a progressive Assad regime by US armed & trained terrorist militias with the purpose of regime change. But according to Bartlett’s own biography, she was in Gaza till after November 2012. So whose authority is she accepting that there was no popular movement against Assad–when Syrians who participated in that uprising testify otherwise & when there are mountains of documentation, including hundreds of videos?

When Bartlett & other Assadist sources describe what is going on in east Aleppo (as an example), they claim the 250,000 civilians sustaining Syrian & Russian bombing are controlled by those “throat-cutting, organ-eating jihadists.” They deny east Aleppo is being bombed & insist it is the “jihadists” who are creating the mountains of rubble. Any documentation to the contrary they claim is “fake news.”

Most Assadists, including Bartlett, only name a few “jihadist” militias like al-Nusra & the Free Syrian Army but they insist they’re all alike, that there are no moderate militia groups. Maybe they’re simplifying because in mainstream media & other sources, there are so many militia groups with such different politics that flow charts are required. Perhaps to prove her authority, Bartlett could detail & document some of the most important groups to show she’s not talking through her hat or serving as an Assad propagandist.

What does she know about the pro-Assad militias? How many are there & where are they operating in Syria? Does she know which of the over 1,000 militias in Syria are armed by the CIA & which by the US military & what their field of operations are? Which ones are Hezbollah? Which ones foreign mercenaries? Iranians? ISIS?

Most importantly, how is the US using those militias to accomplish regime-change? It would have been so much easier for the US to accomplish that with bombers against a weakened Syrian military before Russia entered the war in September 2015. Can Bartlett explain why the US temporized over three years instead of doing just what it did in Iraq, Afghanistan, Libya?

Bartlett leads the chorus that chants like a broken record: nothing one reads in “corporate media” about Syria can be trusted. It is all lies. It is all “fake news.” Her sweeping indictment includes every single media source from the NY Times to Democracy Now that doesn’t have an ardent pro-Assad position & doesn’t promote Russian military intervention.

But to her, the treachery & lying doesn’t end with mainstream media. She has devised a list of NGOs & human rights organizations who also report nothing but lies about Assad & Putin. That list which she promises to expand includes Medecins Sans Frontiers/Doctors Without Borders, Amnesty International, Human Rights Watch, the White Helmets, & others guilty of not supporting Assad’s dictatorship.

It is not persuasive that Bartlett only relies on Russian-owned media or pro-Assad sources, including propagandists like herself, for an understanding of the Syrian war.

So the second question is: how can she be believed? What independent sources does Bartlett use to prove that there never was a popular uprising against Assad’s dictatorship, that “jihadist terrorists” funded by the US are the only opposition to the Assad regime & they are all engaged in “throat-cutting & organ-eating”?

Bartlett would be so much more credible if she would just identify her unimpeachable sources, if she could document a single thing she says, & if she didn’t have such close ties to the Assad dictatorship.