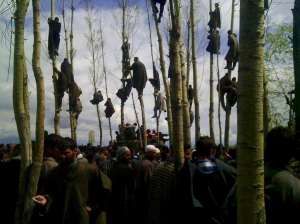 Reposting this from April 8th, exactly three months before the brutal siege began in Kashmir. It reports the violent character of the military occupation & also the breadth of resistance to it. Those in the trees are watching the funeral cortege/protest of Waseem Malla & Naseer Pandit, two activists murdered in a staged encounter with soldiers.

This haunting photo taken by Javaidd Naikoo has since been used on the cover of a book by Shahnaz Bashir & is referenced in a valuable article by Alana Hunt about the struggle in Kashmir. As one who watches photojournalism daily, I consider this photo one of the most powerful, artistically & politically, that I have ever seen.

This remarkable photo was taken yesterday at the funeral procession of Kashmiri activists Waseem Malla & Naseer Pandit attended by over 70,000 people. Those in the trees are trying to view the passing cortege/protest. The two young men were killed by Indian troops in a shootout 55 km/34 miles from Srinagar. The murders set off massive anti-occupation protests in the district where a police vehicle was torched & many protesters injured in clashes with Indian occupying forces. Businesses & shop owners observed a complete shutdown for the mourning.

The Indian army’s version of the shootout follows the same script as all the other executions: two known militants were hiding out in a house; the Indian army trapped them by cordoning off the area; the two tried to escape ‘by opening indiscriminate fire’ & were killed in a field outside the village by return fire from soldiers. No explanation for how they got out of the house where they were trapped, past the cordon, & into the field outside the village.

We’re expected to sympathize with the murders of these “wanted terrorists” by hearing they were members of a guerrilla group. But it’s even more common for the Indian army in Kashmir to fire live bullets & tear gas at unarmed protesters, causing countless deaths & serious injuries. Countless stone-throwers, part of the Kashmir Intifada, are also assaulted & arrested. So it doesn’t seem to matter to the Indian occupying army whether Kashmiri youth carry a gun (allegedly), a rock, or just march against the occupation.

The alibi for summary executions of youth in Kashmir is canned–just like Israeli claims that every Palestinian they execute charged a soldier or civilian with a knife.

Our deepest respect to the two young men. May they Rest In Peace. Our fullest solidarity with the struggle for Kashmiri self-determination.