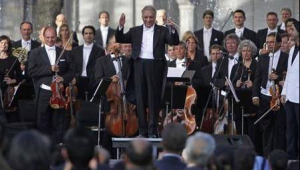 This is an edited post from September 18, 2015. The discussion of that post, particularly comments by Peggy Mohan & Indira Krishnamurti Pradhan, added to my understanding. It is about how Israel & India use culture to render their colonial projects legitimacy.
*****
In September 2013, the Indian government & German embassy in India organized a ‘peace concert’ in Srinagar, Kashmir where Zubin Mehta was to conduct the Bavarian State Orchestra–the first concert of its kind in occupied Kashmir.

Mehta’s role in this is particularly odious & reprehensible. He is an Indian citizen who lives in the US & is a long-time supporter of Israel. He has been associated with the Israeli Philharmonic Orchestra (IPO) since 1969 as adviser, has been its director since 1977, & was appointed its musical director for life in 1981. He is an outspoken opponent of the cultural boycott of Israel, insisting that music unifies people while he uses the IPO as a public relations tool to promote & legitimize Israel.

When he agreed to India’s request to direct a peace concert in Kashmir, whilst India had 700,000 troops deployed there, he cynically claimed he wanted to perform in Kashmir to bring Hindus & Muslims together, as if the conflict were religious. He knew exactly what he was doing to legitimize the Indian military occupation of Kashmir.

Kashmiri activists & political organizations (including Khurram Parvez for the Jammu & Kashmir Coalition of Civil Society) called on Mehta to cancel his concert because the event would be used to whitewash & render normality to the Indian occupation & human rights crimes, including thousands of deaths & executions, disappearances, mass rapes, torture & incarcerations.

Syed Ali Shah Geelani, a noted Kashmiri leader, said “We are under occupation. The majority of people here are suffering from state terrorism; people are being killed. People are suffering. There is no relevance for a music program. India, with the help of the German government, is trying to say the situation should be forgotten.”

Several activists, writers, academics, & religious leaders wrote to the German embassy in India asking them to cancel the concert. Their letter said, “Legitimizing an occupation via a musical concert is completely unacceptable. Art as propaganda, as abundantly documented, was put to horrific use in Nazi Germany. We are sure you will understand that we cannot welcome anything even remotely analogous in Jammu & Kashmir.”

The German ambassador to India replied: “Music is a universal language. Music connects. With the magic power of music, crossing geographical, political & cultural borders, we want to reach the hearts of Kashmiris with a message of hope & encouragement.” The same exact rubbish Israel claims & echoed by Mehta.
In unintentional irony, India had to set up more checkpoints & beef up security forces to hold a peace concert that was protested by Kashmiri activists.

It ended on a discordant note when Nikolaus Bachler, the general manager of the Bavarian State Orchestra, learned the audience was only invited guests—1,500 business leaders, government officials, & diplomats. He said the 80 members of the orchestra waived their fees because they were under the impression they would be playing a public concert for the Kashmiri people & not at an elite embassy event with restricted access. Bachler said, “We were misled by the German embassy. We will raise this issue with the German government that art can’t be exploited by anyone, be it governments or by embassies or any political groups.”

Photo is Mehta with the Bavarian State Orchestra at the Srinagar concert.