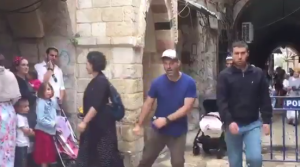 Over 300 Israeli settlers entered the Al-Aqsa mosque compound this morning under the protection of Israeli forces. They taunted Palestinian worshippers by dancing, clapping, & singing. Last Thursday, 55 Israeli settlers toured the compound again protected by Israeli forces & attempted to perform prayers, a violation of the agreement between Israel & the Jordanian trust which governs Al-Aqsa because it is a Muslim holy site.

Stand with Palestinians by honoring & promoting the cultural & economic boycott of Israel. Buy nothing with barcode beginning 729 & check every label on every product from food to cosmetics to clothing & shoes.