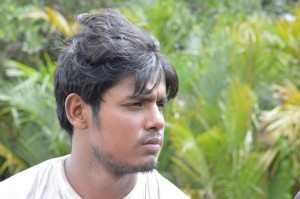 In October 2014, Ziaur Rahman was among a boatload of 310 Rohingya & Bangladeshi men, women, & children being kidnapped from Bangladesh & forcibly trafficked for sale by Thai brokers. They were taken to uninhabited islands off Thailand used as a base for smuggling, eventually to be trucked south to Malaysia.

The group had been divided–some were still in hiding on the island, some had already been trucked south, & Ziaur was among a group of 53 men hiding in the bushes when Thai police intercepted them. The traffickers fled & the Rohingya & Bangladeshi men were incarcerated as undocumented immigrants rather than treated as trafficking victims & asylum seekers–a common human rights abuse in most countries, including the US. Local officials concerned about the human rights of the 53, took them into custody & called in human rights lawyers to defend them.

Zaiur, who was then 22, was interviewed by Phuketwan, a local newspaper that covered the tourist beat with restaurant & nightlife reviews since the area is a major tourist destination but also reported local & national news & has reported almost daily on Rohingya abuses since 2008. Their report on the 53 arrests was a cogent, concise, & moving report on human trafficking of thousands through Thailand & on the persecution of Rohingya in Myanmar.

The article reported claims by human rights groups that “increasing numbers of men from Burma’s Rohingya Muslim minority are being arrested & tortured because of alleged ties to a militant Islamic organisation.” That is an alarming development for Rohingya asylum seekers since it uses Islamophobic hysteria to justify their indefinite incarceration, deportation, & denial of human rights protections.

A particularly moving part of the article quoted Ziaur who told them he became desperate after a lifetime as a refugee in a Rohingya camp in Bangladesh where they suffer persecution, poverty, & degradation. To forge a better life, he left behind his mother, wife, & one-year-old child–only to find himself in the grips of human traffickers. It’s a reality most of us can’t imagine but common to Rohingya fleeing genocide.

Phuketwan quoted this moving passage by Ziaur from his FB wall:

”I ask you, Government of Burma says, ‘This is not your land.’

“Government of Bangladesh says ‘This is not your land. So I ask UNHCR (the UN refugee body) I ask Burma & Bangladesh, to please tell me, ‘Where do I belong? Where is my house? Where can I go?

”I do not want to be a refugee any more. I just want to live in peace.”

Zaiur is now a human rights advocate for Rohingya, currently campaigning against their incarceration in several countries as undocumented immigrants rather than given asylum as refugees from persecution & genocide.

(Postscript: in December 2014, the editor & a journalist of Phuketwan were sued for defamation by the Royal Thai Navy for their coverage of trafficking Rohingya. They were both acquitted in September 2015 but were forced to end publication later that year. Their fearless reporting & the influence of the Navy caused sponsors & advertisers to pull out.)