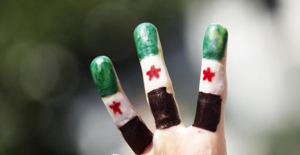 The Syrian revolution against Assad’s dictatorship began, like all the Arab uprisings against tyranny (now called the Arab Spring), in early 2011. Hundreds, if not thousands, of mobile phone videos poured on to social media recording the events in Syria day by day, almost moment by moment. There were protests against Assad in one city after another, day & night, numbering in the hundreds of thousands; there were young protesters scaling regime billboards with images of Assad to tear them down, so repugnant is hero worship to the democrat.

Now to support their counter-revolutionary narrative, Assad supporters are on a campaign to deny the revolution ever took place just like they dismiss all the Arab uprisings & claim they were street dramas orchestrated by US & Israeli agents provocateurs. The denial is rooted in Islamophobic contempt for Arabs & Muslims & promoted by those with a vested interest in maintaining autocracy in Syria & the Middle East.

This brilliant article is by Yassin Al Haj Saleh, a longtime political activist who spent 16 years as a political prisoner in Syria, was part of the Syrian revolution, & is now in exile. Compare his analysis to the tripe now appearing in Russian media & being peddled by Assad supporters & propagandists. Assad apologetics are usually a compendium of outright lies, conspiracy & regime-change scenarios, abject hero worship, Islamophobia, & hatred for Jews masked behind anti-Zionism–the usual rubbish of Global Research, RT, & Sputnik News.

There is a fourth impossibility that Yassin Al Haj Saleh’s article did not mention: that Stalinism would be resurrected from the grave & combine with the deranged libertarianism of David Icke to play a political role in opposing the revolution against Assad.