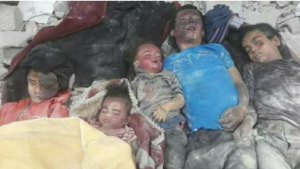 Without any search & rescue operations by the Syrian army which is looting the camp, residents of Yarmouk refugee camp have found 15 bodies of Palestinian refugees buried under the rubble caused by months of Syrian bombing. Six of the victims were from one family, including children & their mother. The residents said many other bodies remain under the rubble because the Syrian government has not provided rescue teams or equipment. Palestinian activists sent a letter to political & human rights organizations urging them to intervene with Syrian authorities to provide equipment for exhumation of the bodies in the camp. The French newspaper Le Monde published a report calling Yarmouk a graveyard for Palestinian refugees.

(Photo from Yarmouk; information from Action Group for Palestinians of Syria)