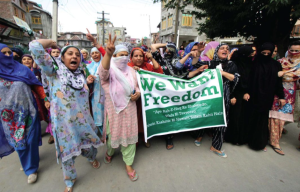 Kashmiri activists broke the international news blackout on their struggle by campaigning on social media. That changed everything because once we learned of the character & criminality of the Indian occupation, international solidarity began to develop. Their tireless work has made all the difference in the world. There’s no turning back on justice now.

Just because India locked out Kashmiris from internet & cell phone communication to silence their voices & FB censored supporters to reimpose a news blackout, that does not mean it’s all over & we have to run for cover to protect ourselves. Kashmiri activists have come too far, have fought too hard for us to fail them when most of them are being silenced or “virtually forced disappeared” as one activist put it.

We need to think out how we can defend freedom of speech on FB & social media because as Kashmiri activists have shown, there can be no political education & organizing, no international solidarity without freedom of speech, without the right to tell the truth about our struggles against brutal oppression.

Social media is how that’s done these days & we have a right to insist FB not function as an agency of the secret police. It’s not just an elementary duty to defend Kashmiris but elementary good sense to defend civil liberties. We don’t live under fascism yet & we won’t if we stand with freedom of speech now.

Photo (from Twitter) is women protesting in Srinagar on July 31st, day 22 of the current murderous siege. If they are not daunted by pellet guns & live ammunition, we cannot be daunted by FB censors.