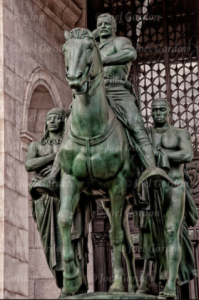 It’s one thing for white supremacists to protest the removal of Confederate monuments; it’s appalling that progressives argue the monuments should be left as part of the historical record. It’s not just a bad case of talking through your hat but of systematic omissions & deceptions taught about American history in public schools. Trump’s misrepresentation of Andrew Jackson was probably a case of both flapping his ignorant jaw & promoting racism in America.

Historian James W. Loewen has written two popular histories on exactly these issues. One titled “Lies My Teacher Told Me: Everything Your American History Textbook Got Wrong” (1995) about how Blacks, Native Americans, & Latinos are removed from US history, & “Lies Across America: What American Historic Sites Get Wrong” (1999) about the hundreds of Confederate monuments from the east to the west coast.

Loewen discusses how these statues & monuments were erected after the decisive defeat of Black Reconstruction, during the time known as the “Nadir of Race Relations” between 1890 & 1940–an era of eugenics, lynchings, apartheid in the US south (known as Jim Crow), segregation in the north. These Confederate monuments were put up all over the country to express triumphal white supremacy & are maintained today by Confederate organizations unreconciled to defeat in the Civil War.

These monuments are lies & have nothing to do with the historical record. They glorify the subordination & extermination of Native Americans; exclude completely the role of Latinos in the US west & southwest (cowboy culture & cattle ranching are completely derived from Mexican culture); glorify slavery & slave owners. They are an abomination.

This repugnant statue of Theodore Roosevelt, US president from 1901 to 1909, flanked in a subordinate position by a Native American & an American Black is in front of the American Museum of Natural History in NYC which was built in 1869. Natural history museums were intended as testaments to the triumph of white supremacy in the US & to colonialism overseas. They were bankrolled by the ruling elite to warehouse the artifacts of “primitive civilizations” defeated or exterminated by superior white culture. It’s entirely appropriate that Roosevelt represent that because of his monstrous role colonizing Latin & Central America.

It’s also entirely appropriate that these statues be destroyed across America so that the real history–including not just slavery, the extermination of Native Americans, & the defeat of Mexicans–but the contributions of Blacks, Latinos, & Native Americans can finally be acknowledged & taught in our schools.

(Photo of the statue by Joel Gordon)