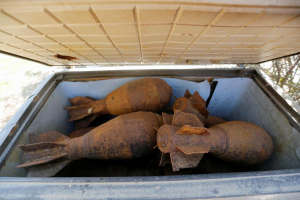 These are mortar shells left behind by ISIS fighters in a freezer at a Mosul, Iraq zoo. When it’s asked who is arming ISIS, the answer is usually that weapons were seized from Iraqi military stocks because the Iraqi military had poor management over their weapons. That explanation worked for a year or so but ISIS has been engaged in military operations in Syria & Iraq for at least four years.

Just exactly what did they seize? A few agencies, including Amnesty International, have reported that ISIS small arms, light weapons, & ammunition come from 25 countries, including Russia, China, Germany, & the US. Where do the armored vehicles & antitank weapons come from?

Given the scale of military operations in Iraq & Syria, not to mention the nine other countries it’s allegedly operating in, that Iraqi munitions heist is long since exhausted. So who continues to arm & finance ISIS? If the US wants to destroy ISIS, why don’t they find out where the weapons are coming from, the routes & methods of their delivery to ISIS on the battlefield, & then cut them off at the pass rather than bombing cities with millions of civilians to smithereens?

US out of Iraq & Syria. Russia & Iran out of Syria.