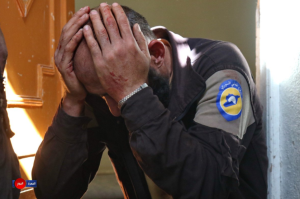 Irish pro-fascist socialists tried to prevent the White Helmets from receiving the 2017 Tipperary International Peace Award at a ceremony tomorrow in Ireland. They failed but they’ll be there making a nuisance of themselves. The fetish that Assadists have about rescue workers has been orchestrated to a fever pitch by Vanessa Beeley, an Assad propagandist, highly overpaid given the intellectual character of her work. Pound for pound, she has pumped out more diatribes against the White Helmets than she has against US military intervention which she never writes about.

But who you gonna believe? One of Assad’s flunkeys who’s embedded with the Syrian army & hangs with Assad officials? Or MSF/Doctors Without Borders who are on the front lines of so many humanitarian crises around the world & who’ve trained some of the White Helmet medical staff in Syria? Or maybe Amnesty International UK who praise at great length the rescue & medical work, not to mention the courage of White Helmets? Or possibly Nagieb Khaja, an award-winning Danish journalist who covered the wars in Afghanistan & Syria & spent ten days filming the White Helmets in action?

We extend our deepest respect to the White Helmets. A humanitarian award is an honor but it’s chump change compared to what they are due for endangering their own lives to save others.

Photo is a White Helmet.