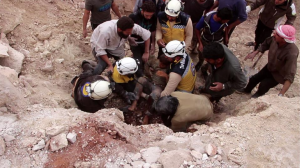 The White Helmets are here rescuing two children. They recovered the bodies of two other children & a man after four Syrian bombing raids on the village if Nqair in the countryside of Idlib. Or as Assad propagandists would describe it, the White Helmets are here engaged in terrorism using “crisis actors” because everything to Assad propagandists & their guppies is street theater orchestrated by the CIA & Mossad. Everything that portrays the brutality of Assad’s dictatorship or the revolutionary potential of Arabs & Muslims is a lie. Blame it on US regime-change; blame it on Israel to justify why Russian & Syrian bombing of civilians is necessary to protect Assad’s national sovereignty. This rubbish hasn’t persuaded the best political thinkers of our time. It has taken those whose relevance has long since passed.

The only principled position is to demand the immediate cessation of Russian, Syrian, & US-coalition bombing of Syria & the immediate, unconditional withdrawal of all foreign military forces from Syria.