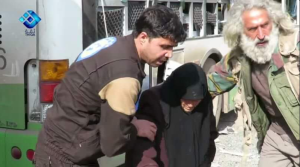 Words cannot convey the horror of the gassing of civilians at Khan Sheikhoun & the bombing of civilians outside Aleppo. They are both monstrous crimes against humanity. Our sincere condolences to the families & friends of all the victims.

There will be no end to these atrocities & to the grieving–not just in Syria, but elsewhere in the Middle East & Africa–without rebuilding the international antiwar movement to demand the immediate, unconditional withdrawal of all foreign military forces in Syria, Iraq, Yemen, Afghanistan, Somalia, Libya, & elsewhere, & to demand Assad stop bombing civilians. He is not bombing “his own people.” The Syrian revolution against his dictatorship does not belong to him. The Syrian people do not belong to him.

As for the grieving survivors of the airport hangars that were killed by US bombers, we leave Assadists to cry their crocodile tears like fools.

No to US & Russian military intervention! No to Russian, Syrian, & US bombing of civilians! Out Now!

Photo is White Helmet rescue worker helping an elderly woman who survived the suicide bombing attack on the bus convoy. Why? Because she is human. No other reason necessary. Political loyalties not an issue.