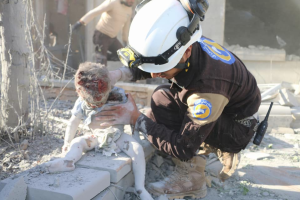 A White Helmet rescue worker with injured child after Russian airstrike in Idlib: here you have one of the reasons why fascists & other Assad supporters spend most of their time vilifying the White Helmets. It’s the old switch & bait routine since in the last 24 hours Russian bombers killed over 50 civilians, including 15 children, in Syria’s “ceasefire zones”. Syria’s allies in counter-revolution–including Russia, Iran, the US, Hezbollah, Saudi Arabi, ISIS–do not want revolution against dictatorship in Syria any more than they want it in their own countries.