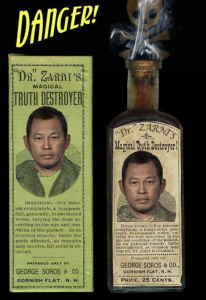 At first, this image was amusing when I saw it on Maung Zarni’s Twitter feed. Judging by the “Prepared only by George Soros & Co.” on the label, it is the creative imputation of fascists of the Assadist kind who who see George Soros behind every struggle against barbarism, who constantly use this kind of jejune meme, whose stock-in-trade is political aspersions, & who campaign in support of the Rohingya genocide. They have no persuasive political defense of the Assad dictatorship with its gulags & execution of thousands of political prisoners, forced disappearances, or the massive daily bombing of civilians. They have no persuasive defense of the Rohingya genocide that anyone who isn’t completely deranged would accept. So they draw on the infantile & produce crap like this. It flies well in their circles based in Islamophobia & anti-Semitism.

On second thought, this isn’t funny at all. Not in a world where dissidence is punished by exile, imprisonment, execution; not when a dissident is opposing himself to the fascist military junta that rules his country. Maung Zarni responded by saying: “I’m dangerous if you are committing a genocide like my country of birth Myanmar that calls itself “Buddhist” & slaughters, loots, land-grabs & rapes Rohingyas. The killers call me “national traitor”, “Enemy of the State”, “fake PhD”, “fraud”, & now “Magical Truth Destroyer”.”

This is nothing to laugh about at all; it is an attempt to make the Rohingya genocide a subject of ridicule & those committed to standing against that genocide into objects of scorn. Always in politics, methods matter. But more important, if your politics are based on supporting genocide & vilifying champions of the oppressed, you can bend over & kiss your ass goodbye as a progressive because you are goose-stepping your way towards the new national socialism.

We are proud to stand with Maung Zarni on the side of the Rohingya people. That is the side of justice.