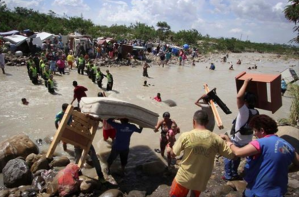 There’s an avalanche of articles accusing Venezuelan protesters of being well-heeled right-wingers orchestrated by the US. Some of the articles are the usual Stalinist parody of events to support the regime in power–like they do in Bolivia, Brazil, Ecuador, Syria. There is also the tripe written by Mark Weisbrot, a longtime, influential supporter of the so-called Bolivarian Revolution whose recent piece in the Guardian-UK defending the Maduro regime was a masterpiece of idiocy or dishonesty.

This is a post I wrote in 2015 about Maduro’s immigration policies. It’s relevant that now Venezuelans are taking lengthy trips to Colombia–the reverse journey of that described here–to get goods unavailable now in Argentina–although Weisbrot claims there is no shortage of goods.

If you want to understand the Bolivarian Revolution political scam & the problems in Venezuela, Ecuador, & other Latin American countries, the writer Jeffrey R. Webber gives the best theoretical framework.

There’s the official version of the Maduro regime in Venezuela for why it’s forcibly deporting & driving out thousands of Colombian immigrants on its western border with Colombia. Then there’s the real reasons.

We don’t have to take the word of the Colombians–here wading through a border river carrying mattresses, furniture, livestock, & children–who claim they were forced out of makeshift dwellings by soldiers & were afraid of what might happen if they stayed. It’s sufficient to condemn the Maduro government for this crackdown by looking at the methods it’s employing: martial law & the suspension of all civil liberties; the deployment of 17,000 soldiers; door-to-door house searches; mass arrest of thousands; & the suspension of due process for those who claim they fled Colombia for Venezuela to escape paramilitary violence.

According to the Maduro regime, the purpose of martial law & mass deportations is to stop Colombian residents along the border from trafficking goods subsidized by Venezuela–like baby formula, rice, & gasoline–to Colombia where they are sold at jacked-up prices for a profit. Are we expected to believe this is all about profiteering from baby formula!?

Sounding like no one quite so much as Donald Trump, president Maduro said on TV: “Who comes over from Colombia? It’s people practically without education. I’m not offending Colombia, I’m just telling a truth…from Colombia, all of the poverty & misery is coming over with a people who are escaping for economic needs & fleeing war.” If international law was worth a damn thing in enforcement, our man just hung himself & does not distinguish himself from Frontex & European Union barbarism.

According to Maduro, who appealed for international aid, over 120,000 Colombians have poured into Venezuela this year. So in the meanwhile he’s employing martial law!? The UN refugee agency isn’t usually much help in these situations but Martin Gottwald, the UNHCR representative in Colombia, did say (last March) that the Maduro regime has the right to “take measures against persons in irregular migratory situations” but “due process has to be offered, with the opportunity to appeal.” Gottwald added, that if you say ‘I left Colombia running for my life, because they threatened me’, the Venezuelan government has to stop {deportation] immediately.” Collective deportations are outlawed & asylum from threats to life mandated by international treaties.

Maduro was elected as a socialist candidate. Kind of in the same way as French president François Hollande who forcibly evicts & deports Roma & assaults refugees on the French-Italian border & at Calais. What’s wrong with that picture!? If you can’t distinguish immigration policy of socialist regimes from neoliberal barbarism, there’s a problem that needs to be addressed. And rationalizations don’t cut it.

Immigration is a human right. Open the border.