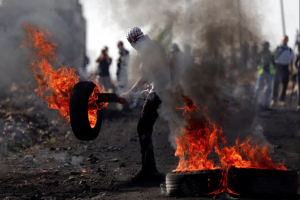 This Palestinian protester is involved in the regular Friday protests in the West Bank village of Kafr Qaddum against the nearby Zionist settlement of Qadomem. This is the habitual depiction in photojournalism of Palestinian (& Kashmiri) activists as lone nihilistic youth engaged in aggressive actions. It doesn’t show that off camera are Israeli troops with assault weapons, tear gas, water cannons, rubber bullets, & armored vehicles with skunk fluid against unarmed protesters trying to stop Israeli expropriation of their lands. They’re burning tires to prevent armored vehicles from running them down.

Qadomem was settled in 1975 by the Gush Emunim settlement movement, a rabid cult that combined Zionism with religious fanaticism. They believed God gave Palestine to the Jewish people & that they are fulfilling a biblical prophecy by taking over the land they call Judaea & Samaria. While Gush Emunim no longer exists as an organization, Qadomem is still run by religious & political zealots with ties to the most right-wing political forces in Israel. Under international law, all settlements on the West Bank are illegal but under Israeli ethnic cleansing policies a distinction is made between legal settlements authorized by the Israeli government (like Qadomem) & illegal outposts which are settlement expansions built after 1991. Qadomem operates a construction company that builds outposts, homes, community & industrial buildings, shopping centers, synagogues, roads, walls–all on Palestinian lands.

The false distinction in Israeli law is completely ignored in practice by Zionist settlers expanding on confiscated Palestinian lands while protected by Israeli occupying soldiers. If the Israeli government takes any steps to dismantle one of the outposts or new construction in the West Bank, the settlers use a tactic called the “price tag policy” which exacts revenge not on the Israeli army but on local Palestinians, including more vandalism of Palestinian property, physical attacks on Palestinians, burning of mosques & fields, uprooting of olive trees, damaging & defacing property.

One marvels at the seemingly inexhaustible resistance to colonialism by Palestinians. But they cannot stand alone & unarmed against one of the most ruthless & high-tech armies in the world. Build & honor BDS, the economic & cultural boycott of Israel. Buy nothing with barcode beginning 729 & check every label on every product.