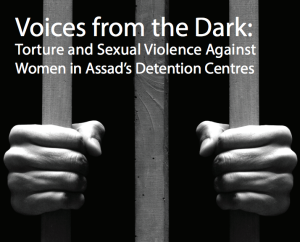 How the Assad dictatorship became a cause célèbre for so many who call themselves progressives is a case of the triumph of propaganda, deceit, & dogma added to Islamophobia, anti-Semitism, & misogyny. There is overwhelming documentation of monstrous human rights & war crimes committed by the Assad regime. Assad supporters deny the evidence or claim those crimes are the price paid for national sovereignty but the question is: national sovereignty for the Assad regime or for the people of Syria who rose up to oust him? It’s a switch & bait maneuver to attempt to identify Syrian revolutionary opposition to Assad with the counter-revolutionary terrorist groups.

It’s estimated that 65,000 Syrians have been tortured & executed in Assad’s gulag in the past six years. Several thousand more were detained & tortured but not executed & managed to flee into exile after release. The Syrian NGO named Lawyers & Doctors for Human Rights (LDHR) issued this report in July 2017 titled “Voices from the Dark: Torture & Sexual Violence Against Women in Assad’s Detention Centres.” Trained doctors examined & lawyers took testimony from eight Syrian women who had been detained, tortured, & sexually assaulted in Assad’s prisons. None of the women knew each other nor were they detained in the same prison.

The LDHR report in full: http://guernica37.org/wp-content/uploads/2017/07/Voices-from-the-Dark.pdf