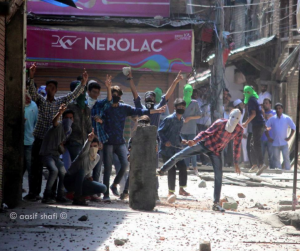 Aggression against Palestinian religious freedom focuses on the Al Aqsa mosque compound but that is by no means the only religious institution coming under Israeli attack. The extremes of such violence are in Gaza where just during the seven-week carpet bombing siege in July-August 2014 Israel destroyed 64 mosques & damaged 150 others. Ten Muslim cemeteries were also bombed out.

In the West Bank, such incidents are a constant where settlers vandalize Christian churches & mosques with graffiti like “Muhammad is a pig,” enter mosques to vandalize & torch holy books & prayer rugs, & there are cases when they outright torched mosques beyond repair with complete impunity from Israeli authorities. There are also Israeli attempts to claim Muslim holy sites like the Ibrahimi Mosque in the West Bank city of Hebron by inventing prior religious & historic claims for Judaism.

That same situation prevails in Kashmir where most media attention focuses on Jamia Masjid in Srinagar but mosques & religious institutions in other parts of Kashmir have also been under military siege for decades. Since there are no settlers yet in Kashmir, India uses its troops to enter mosques & vandalize, ransack, desecrate the premises. Worshippers have been beaten & killed, imams have been arrested & killed, mosques have been blown up, barraged with mortars, rifle grenades, open fire, & torched to the ground.

All this to strike at the heart of a culture by denying people the freedom to worship according to their traditions & deepest commitments. This photo is from July 14th in the Reshi Bazar area of Anantnag district in Kashmir when occupying forces attacked worshippers after Friday prayers. One young man sustained critical injuries & at least 14 others were arrested during the protests. There is no report on what happened to those young men–whether they were released or held in custody for torture or incarceration under administrative detention without any form of due process.

Freedom of religion is a fundamental democratic right. Defending it in Palestine & Kashmir is central to the struggle against occupation & for self-determination.