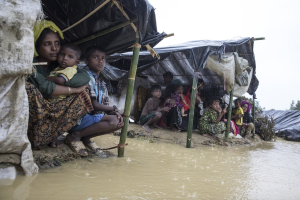 Most of the vilifying campaign against the Rohingya Muslims, from whichever source, focuses on Islamophobic claims that they’re terrorists. That’s especially true in Indian media since the government is attempting to deport 40,000 refugees who fled for their lives after the Burmese army used Indian-bought weapons against them. But now the most corrupt forces in modern politics are introducing other charges against the Rohingya, including drug trafficking. That’s not possible since the Burmese junta has drug trafficking sewed up as a major part of its investment portfolio. The US sanctions list (ended in 2013) once listed the individual generals & their business associates most involved in opium & meth trafficking.

Now, the fascists are introducing the staple of Islamophobia: misogyny–focusing on the reproductive lives of Rohingya women, as if women & babies were the root cause of genocide against the Rohingya people. Nationalists are all over social media shaming & ridiculing Rohingya women for a high birth rate, claiming every one has 8 to ten kids. They have no idea how many kids Rohingya women have. It’s just the standard fare of racism used against the oppressed since the hay day of European colonialism. It hasn’t improved in theoretical integrity since Thomas Malthus wrote “An Essay on the Principle of Population” in 1798–nor have his rancid claims gone away with every cogent rebuttal, including by Karl Marx.

The Health Minister of Bangladesh, Mohammed Nasim, now joins the Islamophobic chorus with a claim that up to 18,000 pregnant women are among the new Rohingya refugees. In the utter chaos of the refugee camps, where the presence of humanitarian aid workers, including from the Bangladeshi government, is not evident, how does he know that? Our man explained that “Rohingya women are unaware of birth control methods. They did not receive health services in Myanmar.” It’s true genocide prevented them from receiving prenatal & maternity care, reproductive services, or health care of any kind. That doesn’t mean they’re ignorant about birth control. But even if Rohingya women have large families for religious, cultural or any other reasons–& there is no evidence they do–that is their right & no one else’s business. What should concern the racist monitors of Rohingya women is that part of the genocide is subjecting Rohingya women & children to mass rape by the Burmese army.

Our man the health minister went on to explain that Bangladeshi health workers have been distributing contraceptives to the refugees–“condoms, birth-control pills & injections that stop ovulation for up to three months.” That would be a neon red alert. They can’t get food & clean water to refugees but they’re handing out birth control like candy? Rohingya women have no idea what those injections contain & given the racism & xenophobia against them should not take anything internally unless distributed by thoroughly vetted healthcare agencies with a commitment to the welfare of Rohingya women & not beholden to the Bangladeshi government.

Just because they are victims of genocide, just because they are refugees does not mean Rohingya women should be denied reproductive freedom or shamed for having children. They should be provided with prenatal & reproductive services in the camps. Stand with the Rohingya people against genocide & in demanding healthcare for men, women, & children.